Introduction: Carotid intima-media thickness (IMT) is an early marker for vascular age, with higher IMT signifying atherosclerosis. We have previously shown a high burden of cardiovascular (CV) comorbidity with increased IMT and the presence of other CV in pediatric liver transplant (LTx) patients. Leucocyte telomere length (LTL) from peripheral blood leucocytes is an established marker for biological age. The aim of our study was to investigate LTL in LTx patients and its course over time, and furthermore to evaluate its association with IMT and other factors that may be independently associated.
Methods: We measured LTL in 97 pediatric LTx patients (age 11.6 ± 3.7 years; 6.8 ± 4.0 years after LTx) and assessed IMT, renal function (eGFR) and liver parameters. Additional annual follow-up exams could be obtained from 69 patients (n=27 with one, n=22 with two and n=20 with three follow-ups) leading to a total number of 228 observations. Linear mixed modeling was used to test for factors independently associated with LTL. Individual LTL slopes as well as slopes for IMT, eGFR, and liver enzymes (AST, ALT, GLDH, GGT) for each patient were calculated as a function of time using linear regression. We then classified the LTL slopes as “stable LTL” and “LTL shortening”.
Results: Linear mixed modeling revealed an association of lower LTL with higher IMT and higher AST, but not with, age, age at transplantation, sex, or diastolic blood pressure (Table 1). 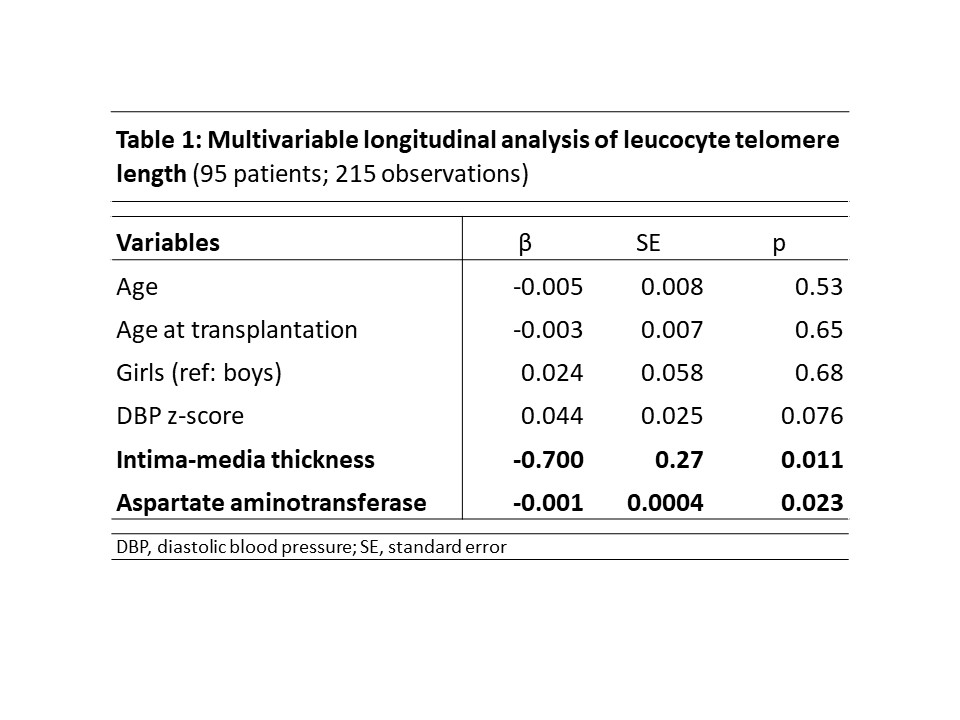 Of all patients, 38 were classified as having “stable LTL” (median LTL slope: 0.05, IQR: 0.015 to 0.087), and 31 depicting “LTL shortening” (median slope: -0.09, IQR: -0.22 to -0.037). Stable LTL patients showed an IMT decrease of 0.02 per year (IQR: -0.10 to 0), when compared to those with LTL shortening, who demonstrated no changes in IMT (median: 0, IQR: -0.04 to 0.02, p=0.042). Tendencies of a slower decrease of eGFR and a decreasing GLDH per year were also observed in those with stable LTL patients compared to those with a decreasing LTL slope.
Conclusion: LTL as a marker of biological age is significantly associated with IMT, a marker for vascular age, suggesting that this group of patients has undergone an accelerated aging process. This assumption is further underlined by the finding that LTL was not associated with chronological age, but with AST pointing towards other mechanisms leading to LTL shortening in pediatric LTx recipients.
Further studies are warranted to identify potential influencing factors that could serve as targets to stabilize LTL and thereby potentially improve vascular health in LTx recipients.