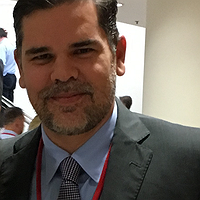 Introduction: One of the challenges in segmental liver transplantation (SLT) is the reconstruction of Hepatic Veins (HV). The occurrence of hepatic vein outflow obstruction (HVOO) can lead to congestion and consequently graft dysfunction. Usually, the venous anatomy of the Left Lateral Segment (LLS) is favorable for venous reconstruction due to presence of a single (Type 1) or two HV closely situated openings at the cut surface (Type 2) that through venoplasty on the bench can be joined. However, rarely the LLS can be drained separately through the left HV and middle HV (Type 3). In these circumstances the resection plan of the LLS grafts results in two widely separated vein drainage ostia, which requires strategies in venous outflow reconstruction. This study aimed to describe the technique used in the reconstruction of HV of Type 3 LLS grafts from live donors, as well the short and long term outcomes.
Methods: Small HV branches (≤ 3 mm in diameter) were not considered for vascular reconstruction due to the lack of risk of HV congestion at occlusion. Vascular reconstruction with an interposition homolog vein graft (HVG) were considered in LLS with hepatic vein opening on the liver cutting surface, making a simple venoplasty impossible. In this case, a HVG was interposed in parallel communicating the segment III vein to the left HV, creating a single venous ostium in the LLS graft, it was anastomosed to the communication hole of 3 HV of the recipient. Pre-transplant variables included age at LT, diagnosis, recipient weight. Intra-operative parameters were graft-to-recipient weight ratio (GRWR), graft congestion, surface bleeding. Post-transplant outcomes included the occurrence of vascular complications such as HVOO, portal vein thrombosis, hepatic artery thrombosis.
Results: From February 2017 to August 2021, six (06) LLS grafts recipients underwent hepatic venous drainage with HVG interposition. Age at LT was 12.1 months (7-19), Biliary atresia 5/6, mean of recipient weight at LT was 7.2 kg (5.5 – 11.2) and the GRWR was 5% (2.5% to 7%). No liver graft showed venous congestion or bleeding on cut surface after reperfusion. There were no vascular complications or graft dysfunction in the early or late postoperative period. All patients are alive with a good graft function.
Conclusion: Strategies in the reconstruction of venous drainage play an essential role in the surgical management of SLT. The use of HVG interposition in the reconstruction of the anomalous HV prevented the occurrence of graft dysfunction and/or vascular complications.